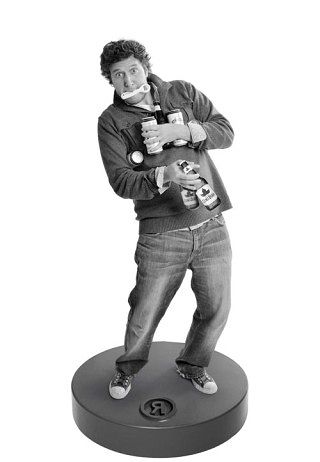 It turns out that people other than Aaron’s mother like his work. In fact, Ellen Degeneres declared his Vim commercial as her “favorite ad of all time”. On the same program, she said his IKEA commercial was #3.

But for those who don’t trust Ellen – Aaron has won at every major national and international award show including Cannes – where, after earning another gold award in 2008, he became the first writer in the world to garner Cannes gold awards in Film, Radio, and Media.

Aaron has hauled in more Cannes gold lions than any other creative in Canada.

Prior to joining Rethink, Aaron spent most of his ad-life writing for, and leading the creative department at Zig (now CP+B). Since his arrival in 2002, the agency placed in the top five in Canada for nine straight years.

Aaron has also been a judge in Cannes, The One Show and has been the keynote speaker at industry events 3 blocks away from Rethink and as far away as Seoul, Korea.

When you don’t see him doing something industry related, you’ll find him at the hockey rink with his kids.